Long since due from FinalBout II

Posted by tyler barnick at 8:15 PM No comments:

A Graveyard on the way to Death Valley

As i'm sure you all know, last week was my 36th birthday (thank you for that lovely gift you got me, it was fantastic), and I took the opportunity to ditch a few days of work and pack up the truck, grab one of my favorite carbon based life forms, and head north. While the eventual destination was Mammoth Lakes, our route took us east through Death Valley, and along the way, the road brought us to the edge of a fairly breathtaking overlook. We pulled off the side of the road for a bit of a stretch and to take in the sights, when I noticed the carcass of what appeared to be a mid80s/early 90s domestic sedan, lying far below us on the rocks. A quick look around revealed nearly a dozen other cars in various state of decomposition, as well as a number of tractor tires, hundreds of bottles and cans, and even a frisbee. My best guess is that this is the fastest way to get rid of an unwanted shell, for the residents of Trona, CA, and the surrounding area.

A quick scramble across a very unstable rock hillside took us face to face with these assorted skeletons, ranging from what i can only guess was a late 60s sedan, all the way up to a mid 70s japanese wagon, with a boulder placed perfectly across the dashboard.

This trip was in no way planned to involve anything car related, which is a rarity for me. Somehow it ended up that way without effort. Even the most beloved cars can sometimes meet undeserving fates. Hopefully these ones will continue to bewilder and amuse any traveler lucky enough to spot them. 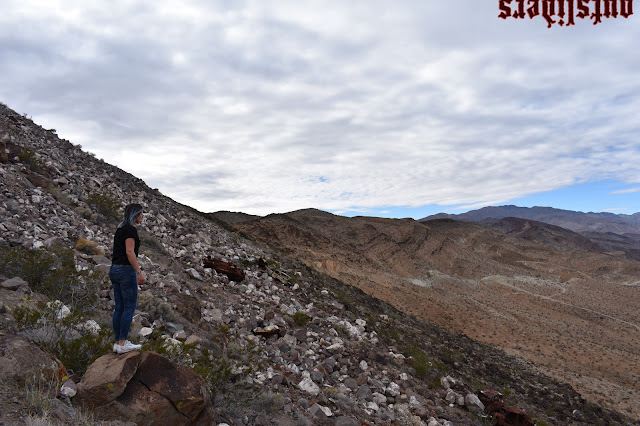 the road is out of frame, above us on the left, and continues off in the distance. multiple remnants of cars directly ahead, and more below on the lower right

click the image for a larger size, additional photos here:

Posted by tyler barnick at 9:58 PM No comments:

Fortune and Glory in the form of two R33 GTR-LM

Its just under a month since I landed back at LAX from ten days in Japan. I've barely managed to glance at the photos and video of the trip, but one of the highlights by far was our time spent at the Nissan Heritage Museum, located at Nissan's Zama facility. The warehouse holds nothing short of an absolute treasure in the form of dozens of Nissan and Datsun race cars, prototypes and homologation specials, as well as flawless examples of most of the cars sold under those two brands, dating back decades.

I'll get round to making my way through everything at some point, but for now, get some.

R33 GTR-LM racing edition, along side the R33 GTR-LM Road Car. Per FIA rules at the time, if you submit a car for race purposes, you must have that specific model/edition available for sale to the public. Normally a scant few production versions would be produced, my understanding is this road going version is 1 of 1, enough to satisfy the FIA criteria. The massive arches simply dwarf the 18" NISMO racing wheels, and even though it is badged at a GTR, the LM was converted to RWD. 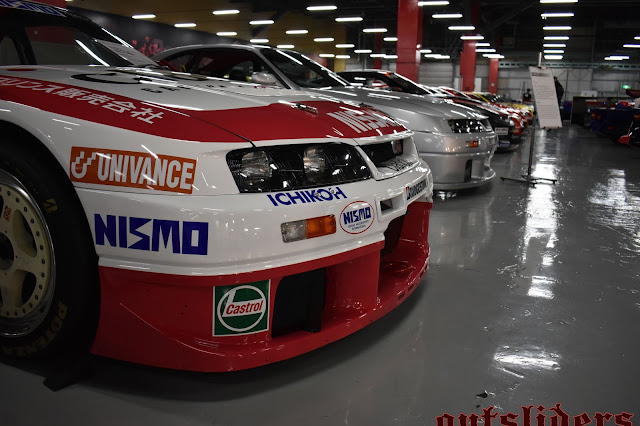 This was a bit of an odd and entirely unexpected incident. Max from GOLDSTAR had found us an amazing mansion on Air B&B, for Weds and Thursday night. AcidSquirters from all across the US, and even a few from Canadia, descended up on the place and proceeded to cut loose. Video evidence may or may not be released of events which may or may not have transpired during these two nights. Friday morning, after the ruckus had been subdued, and we were packing up to leave, A few cars arrived to grab some of the dudes, and head north a bit early, when the police arrived.....

good think JY was there to hold it down and protect our street cred.
Posted by tyler barnick at 9:37 PM No comments:

The insanity of it all.

While so much of the focus at FinalBout is on the Advanced course and running full tilt along the k-rail wall, so much incredible driving goes down on the Intermediate course. Long and flowing, it is the perfect setting for stacking cars up, and the perfect backdrop in which to frame them. In the past, the brilliance of Julian and Ryan from ANIMAL STYLE had almost overshadowed Baby J (Jason Bostrom), this weekend was his time to shine. He took full advantage of the Zestino Tyres and was hunting down doors without a second of hesitation. Run after run, he, Simba, and Chob (both from the Chicago drift team PROCEED) were making the Intermediate course center stage. Chob pilots a small island of a Lexus GS sedan, turning rubber into haze with over 500whp on tap (298LWHP) and Simba's s13 coupe with a refreshed SR20 setup blew through the weekend without a hiccup.

(click for larger size)
Posted by tyler barnick at 9:34 PM No comments:

So, as you may have heard by now, this past weekend was the last FinalBout event to be held. When the announcement was given, it was met with immediate disappointment by many, but as the reasoning was explained, i think the initial blow softened, and it was quickly accepted and even embraced by many. I'd been hearing some pretty substantial rumors leading up to the event and was happy to see that the reaction from many of the drivers, teams, and spectators was that the experiences shared, friendships made, and tires shredded, were life changing, long lasting, and in my opinion, more than validated the goal that the event had set out to achieve.

My personal experience with the series as both a driver and spectator has been phenomenal. The following are some of the moments captured from the week long trip, from LAX to ORD, from Chicago to Shawano, and back again. More than just the driving, the atmosphere and the comradery are the true successes of the event. As many of the drivers and event organizers call it, the AURA of FinalBout is something that has already been spreading across the country and beyond.

Over the coming days i'll be going through and adding photos and videos that i feel capture both the fantastic driving, and perfect grassroots style of the event, and the days leading up to, and following the event (probably in no semblance of chronological order).

(all photos can be clicked to expand)

The REVGASM Zenki S14, with Heart of VERTEX.
Josh's long time S13 chassis met its end last year, and in the time since then, he's crafted this as a temporary replacement, while continuing to hunt for a permanent successor. After seeing the many revisions his previous car had evolved through, it was difficult to know what to expect when transitioning to an all new chassis, but the S14 presented is nothing short of exceptional. One can only daydream about what he'll have in store next.
Posted by tyler barnick at 11:01 PM No comments:

So if you're into drifting, and live in the greater SoCal region, you should know 626Drift. These guys have been hosting events for a solid decade, supporting drifting and providing a venue for legions of drivers to learn and progress from beginner to intermediate and on up from there. This weekend was no different, and the Balcony section at Willow Springs Intl. Raceway was again the spot to be to watch skids, go for car rides, and get covered in tire smoke and gasoline fumes. These small events are some of my favorite, due to the mellow atmosphere, and large number of my friends who consistently attend. Its been a few weeks since the AutoFactoryREALIZE dudes got back from their mission to Shawano, WI to attend FinalBout, and it looks like they're ready to start stretching their legs again. Meanwhile, Kam from SNEEKY KIDS has finally got his Corolla to drift-ready condition, and this car screams with presence and style. 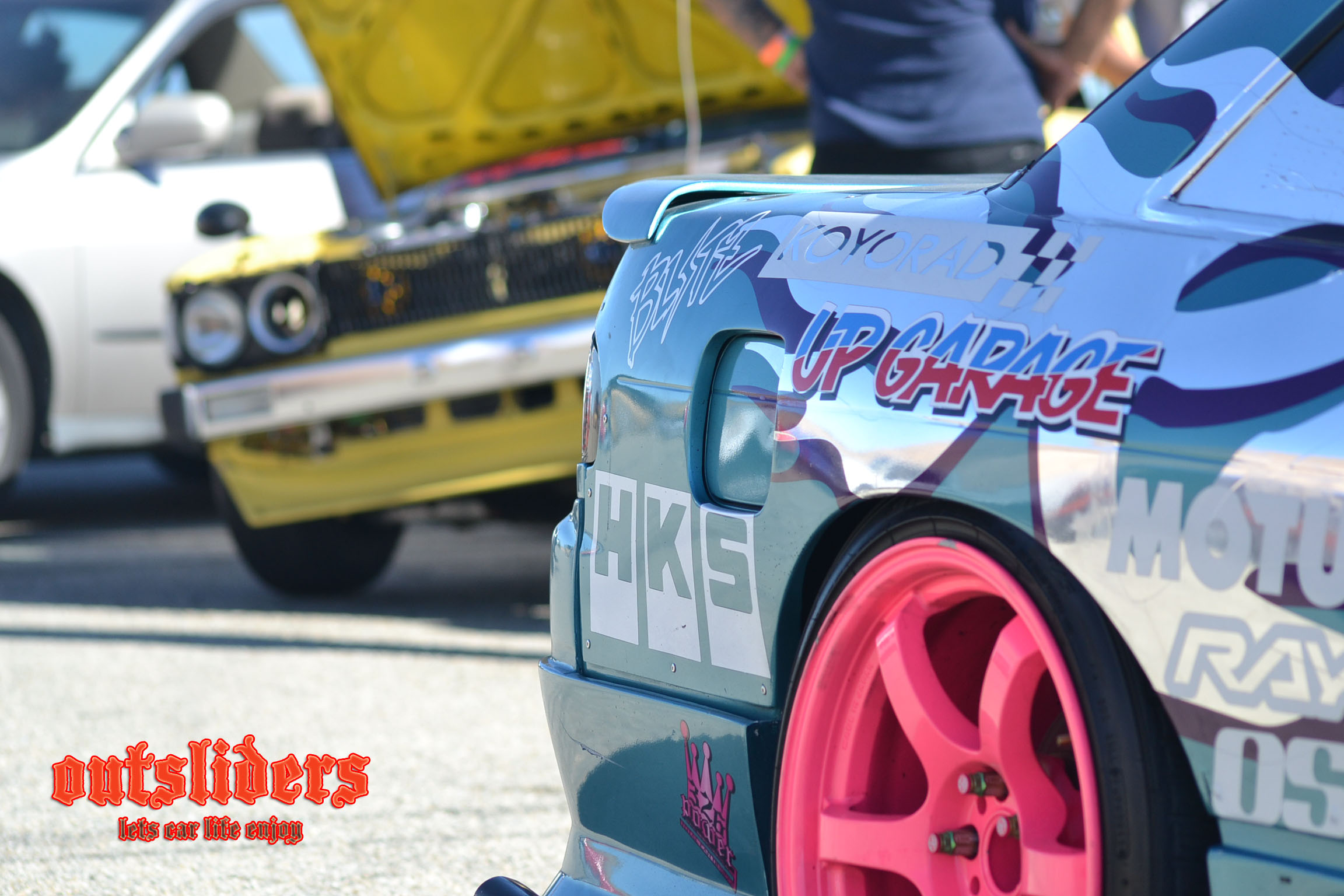 Posted by tyler barnick at 9:03 PM No comments: